Together: The Birth of a Series

Together: The Birth of a Series

When I started with photography, I was always fascinated by the endless possibilities of what one can capture. Finding the light, enlightening the light or as Adam Gibbs says the quite light, framing it with attractive compositions that puts the viewer into the scenery, discovering a nice tonal and color contrast that supports the main path of the photograph – all with the intention to find and capture the essence of a moment.

Just recently, I have been more and more motivated to think in series or sets of photographs. A set follows a shared intention, a unique story but should at its best also follow a common look. About four years ago, when I started with photography, I participated in a workshop with Bruce Percy. He has been an excellent advisor on creating these sets of photographs and I am still very thankful for this direction.

Where does a series start? When does one know when it starts?

Everything starts with an idea. In a area close to where I live, on a high plateau in the mountains where it is usually windy and where we in winter have some demanding conditions, I discovered that tree group together. It seems that certain trees form and grow in small families to protect each other against the seasons. While one can find large empty space in between them, there is always a small group of them emerging from the wasting landscapes. Isn’t it amazing how they seem to stand together? How they communicate? What may they exchange?

“Diversity is about all of us, and about us having to figure out how to walk through this world together.”
| Jacqueline Woodson

This has been the main starting point and I wanted to go out on a winter’s day in December 2019 to capture these trees that almost seem to hug each other. I prefer the slight overcast days over any sunny day and the conditions were perfect for that. In fact, I was able to capture a whole series of photographs – all in one day. I was so inspired by the scenery and the idea that I forgot how demanding it was with the snow shoes and by the end of a long way, I needed to go back to the car for more than 2 hours. And I arrived with a smile. 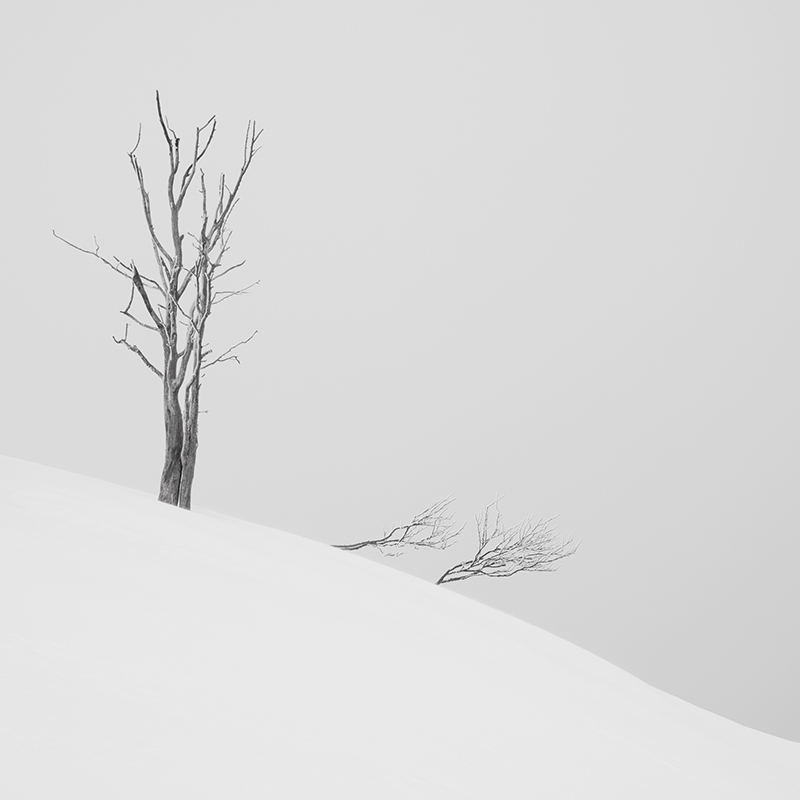 When I started to develop the photographs I recognized that the all have beautiful tonal shades and I wanted to emphasize them further in post. While working on the first photograph, I tumbled upon an inversed version of the photograph. It basically was a luminosity mask on the darks that inspired me to look further into this direction. And the final idea was born. 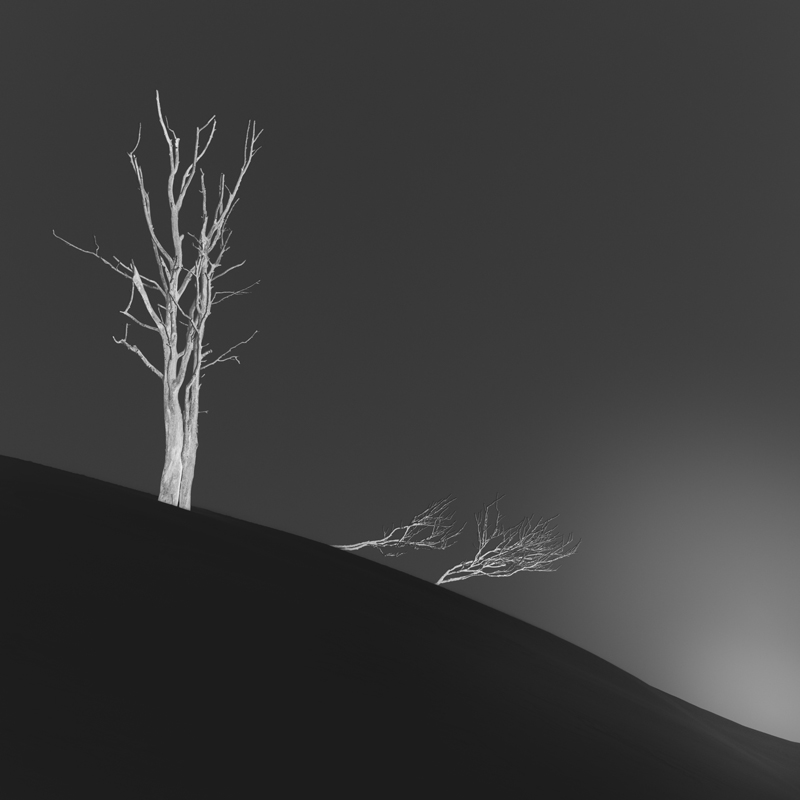 As a title I selected “Together” mainly to underline the way all trees group and hug together. However, the word Together mirrors also how the black and white elements of the Yin and Yang hang together and form a dualism characterising how seemingly opposite elements may actually be complementary, linked and interdependent. Everything incorporates elements of Yin and Yang, potentially manifesting differentaly. For these reasons, I created a White and a Black line of this series as well as a unified line (as one cannot separate them and because they belong Together).

Because it is sometimes not clear what the receptive (usually the Yin element) or the active part (usually the Yang element) is, I switched the position of the black from originally right to the left side in my unified Yin & Yang line. All photographs of the White line incorporate grey tones hinting towards the existence of the darks. All photographs of the Black line incorporate bright tones and light hinting towards the existence of the lights. As such, in each photograph I indicate already the existence of the counterpart. To give more weight to the connectedness of the Black and White part, I flipped the white version horizontally such that the trees can cling together. 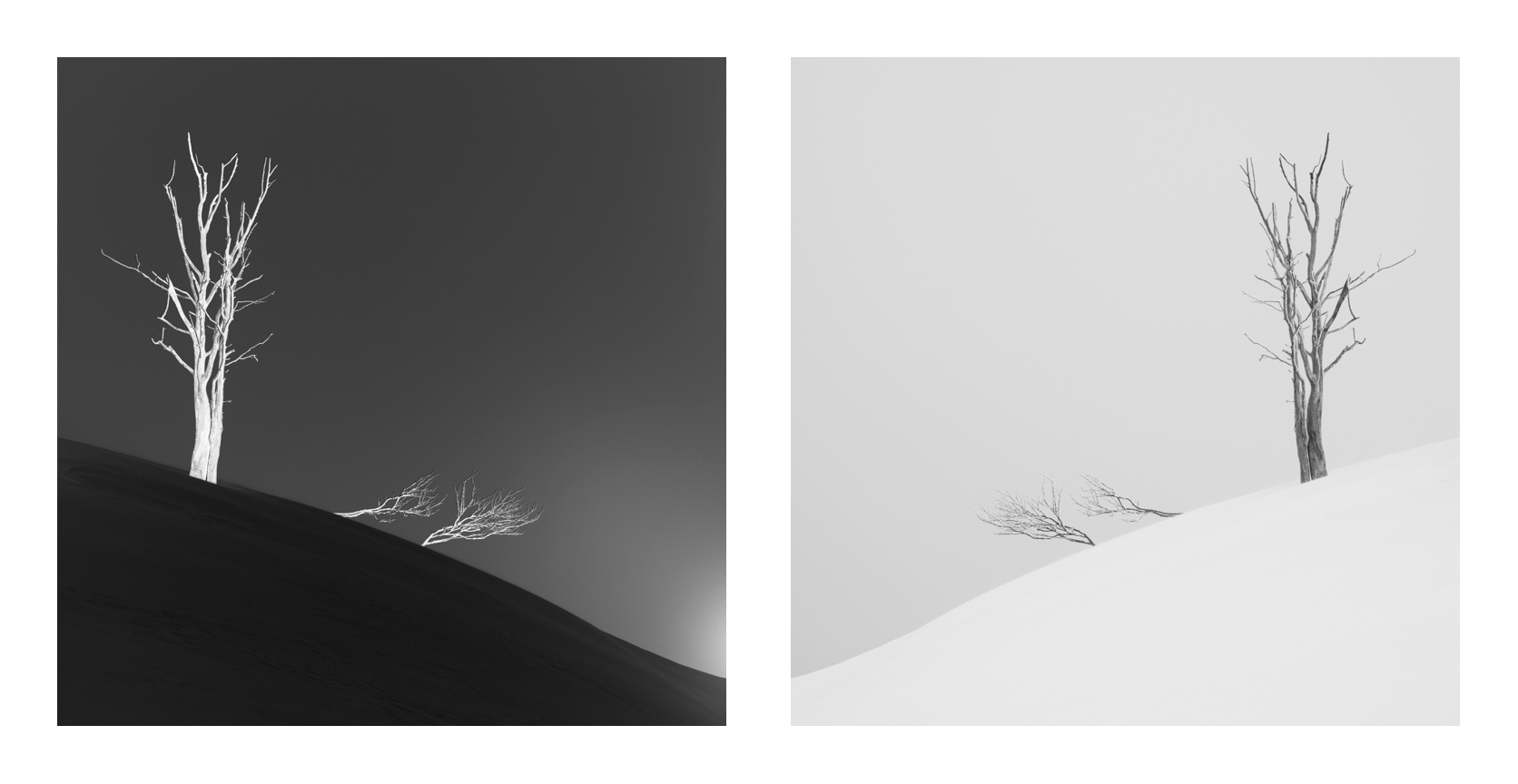 The Together series was born and I am very happy to have created it.