Learning From Your Limitations

In the last couple of months I’ve heard many friends, colleagues, clients and followers talking about the limitations they currently face. As a consequence, many feel they are less productive. I especially hear this from artists with sensitive souls who feel a weight crushing their soul to silence. They feel paralyzed. In this short blog post I’d like to encourage those giving a lot of weight to their limitations and try to transform them into a chance, a potential and a possibility. Learning from you limitations. Once you accept and cope with them, new doors will open.

Limitations may come as defect or restriction. Some are exogenously given, not under your control and will never change, such as a disability, for example color blindness. Others are exogenously given and might change over time, such as certain legal rules or regulations, for example to wear masks and wash your hands. Still others are endogenous recommendations, such as we are asked not to talk in a concert that often work through social norms, group pressure and compliant behavior. However, the majority of limitations are built-in and act from the inside. I don’t want to pretend to talk much about the first two categories. There are certainly better experts on this than I am. But I would like to say something about the internal restrictions. By differentiating between the noun “limit” characterizing the restriction, the verb “to limit” describing the activity to restrict, “limitation” defines the act of limiting or the state of being limited. Let’s have a look at built-in limitations first. Afterwards, we’ll discuss external limitations.

What are the consequences of being built-in limited?

Limitations have consequences. They affect our self-concept and our self-respect. The exogenously given ones restrict us, but we restrict ourselves often through the built-in limitations. We fragment our thoughts, we loose concentration, focus and attention. The built-in limitations become repetitive thoughts. And then not the consequences of the limitations are the problem, but the repetitions. We can’t let go. As Sting said in the beautiful song “The windmills of your minds”:

“Round like a circle in a spiral, like a wheel within a wheel
Never ending or beginning on an ever spinning reel
Like a snowball down a mountain, or a carnival balloon
Like a carousel that’s turning running rings around the moon
Like a clock whose hands are sweeping past the minutes of its face
And the world is like an apple whirling silently in space
Like the circles that you find in the windmills of your mind!”

| Sting, Windmills of Your Mind

Through these circles, we not only loose productivity, we also loose energy level, happiness and joy. Like Don Quixote from Miquel de Cervantes’ novel, we are running against our inner windmills every day. Don Quixote misunderstood the windmill field for giants he needed to fight, but finally gave up concluding that a magician must have turned the giants into windmills. We misunderstood that the giants in us are created by ourselves and that we have turned them into dangerous windmills. Often we set these limitations by choice. For example, we create an agenda, a time management plan, to-do lists, eating plans, daily habits, we tell others about our expectations and communicate how we want to be treated. However, they are our decisions. The important argument in here is that we can also review and change them at any time, learning from our limitations.

What are the consequences of being externally limited?

The situation in 2020 is challenging for everyone. As the cartoonist Graeme MacKay pointed out well, the tsunami we currently face might not be our biggest threat. 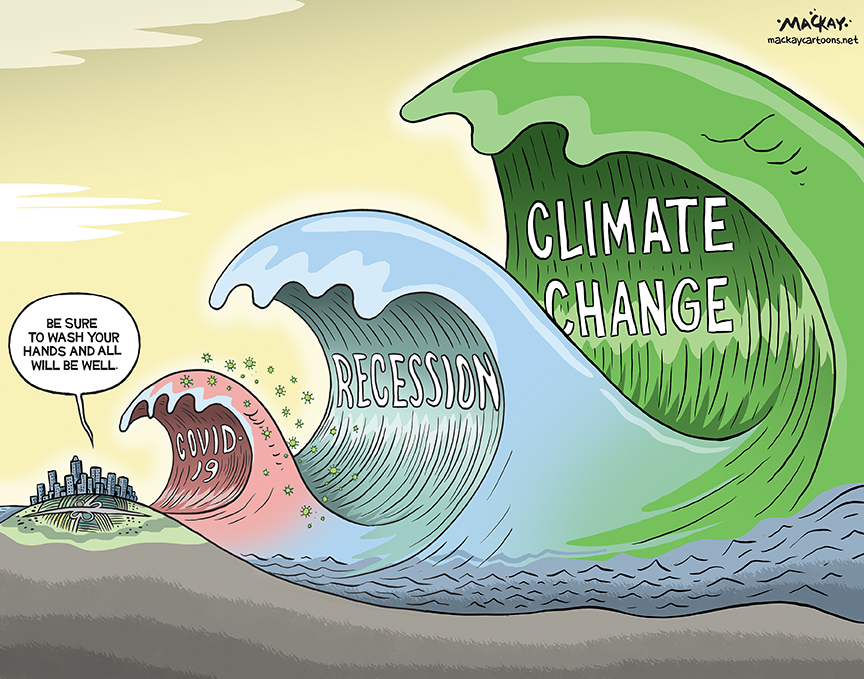 Many founders, start-ups and self-employed people struggle for their existence. They are running out of liquidity, bankruptcy threatens and the upcoming recession may worsen this situation. Well, now are talking about a different kind of limitation, are we? These beasts are huge and I often hear the argument that we can’t do anything against COVID, neither against the recession nor against the climate crisis. This is the responsibility and task of the governments, the politicians, the scientists or the philanthropists. I don’t think this is true. We might not change the world, but very similar to the built-in limitations, we are able to review and change us and our contribution to the tsunamis at any time. Through that, we can find work-arounds the limitations we might face, even if they are externally given. We do not have control on its origin, but we have control how we can deal with it.

How can we cope with limitations?

1. Start with silence
Silence is always a good response, as the Dalai Lama once said. And reflection. We need limitations. They remind us about ourselves, they enforce us to think about ourselves and our need, what we tolerate and what we don’t. They help us to meet our needs and take advantage of us. As such, the first step is recognizing and accepting them. Once we have a connection to ourself, we are in the state to be clear about our limitations and accept the ones we want to have in place. This leads us to setting more honest priorities to ourselves.

2. Do less, focus more
When we are aware of the limitations and priorities in our life, we also may have a realistic perception of what we are capable of. That we may require breaks, rest and silence. Our society often calls for “Getting Things Done”, or get more things done in a shorter amount of time, do more, be more responsible. However, I’d say we should do less, give us time and focus on the meaningful ideas. It’s not about do more and get those things done, it is about getting the right things done in your pace.

3. Self-invention
Through focus, we give us the chance to find ourself. As I described in my last blog post on Creating a Personal Style or Finding Identity? we’ll stop imitating other artists, because their style is successful, we start creating our own style, we start follow our own ideas and intentions. As a consequence, we may feel less intrigued to watch and consume other’s YouTube tutorials, but to enjoy the happiness that stems from creating our own results.

4. Now
Eckhart Tolle described the “Power of Now” in his guide for day-to-day living. He emphasized the importance of living in the present moment. The Dalai Lama paraphrased the same idea with his two day metaphor:

“There are only two days in the year that nothing can be done. One is called Yesterday and the other is called Tomorrow. Today is the right day to Love, Believe, Do and mostly Live.”
| Dalai Lama

From my point of view focus is an immediate outcome of presence, but if we are present we will also be in a better state to focus.

5. Enjoy to road
Everyone arrived to this world with different tools to play. However, we call are able to do almost anything. If we listen to the inside and accept a state of never knowing where a project is taking you to, you can enjoy the travelling.

To sum-up this blog about learning from your limitations, I’ve seen many artists in the last months, who have started offering their first online classes, who started to enjoy the details of macro photography, who took out a pencil and drew or who started to discuss more serious topics with their different guests on podcasts. They all try to re-invent themselves, because they realized that no matter what limitations they face – built-in or external threats – they can do something about it. And you can do as well. In this sense, I am wishing you all the best in learning from your limitations and hope you can enjoy the path.

Eckhart Tolle, The Power of Now: A Guide to Spiritual Enlightenment, Namaste Publishing, Vancouver BC, Canada, 1997.

Sting, The Windmills of Your Mind, on the album: The Thomas Crown Affair, 1999 (originally composed by Michel Legrand with lyrics from Alan and Marilyn Bergman 1968).